CHALLENGE: What’s in a name?

Don’t mean to go all Shakespeare for this post but..if the shoe fits.

I received a challenge from some friends the day before the party. Their terms were specific, which I liked. I was given the name of a candy and I had to pair it with a wine on the basis of the name.

It’s quite the moniker. My friend bought it in England so I knew it would be interesting.

My vision of this candy: small, round gummies encased in some type of thin chocolate shell. I think that’s a decent guess. With this image in mind, I went with a generic white from Portugal which sounded fairly dry and not too sweet. All things considered, I think it went alright.

Photos are not stellar because the session was at a party. 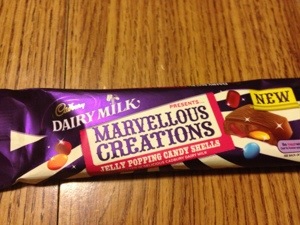 The Dream:
I thought the candy was a gummy of some sort, so I picked a dry wine to counter both the texture and sweetness of gummies. I also didn’t want anything with too strong a flavor, since gummies tend to dominate and overwhelm in that regard.

The Reality:
The wine is bubbly and dry, just as I expected. The bitterness is encouraging because I thought it would counter gummies nicely.

I was wrong about the candy, which is ok. It is actually a milk chocolate candy bar with jelly beans and…pop rocks.

The sweet chocolate dances well with the bitter dry wine. The jelly beans don’t do anything funky to the flavor since they are so encased in chocolate. The pop rocks are actually a nice addition because they buzz and fizz with the sparkling wine.

Overall, I’m pleased by the mixture of the milk chocolate and the white wine. As a blind pairing goes, I consider it a success.